Comet P/2006 T1 (Levy), due back to the Sun's neighbourhood in mid-January 2012, its first return to the Sun following its discovery in 2006 was eventually recovered by Richard Kowalski from the Mt. Lemon Survey early on 17 Dec 2011 during a search of the object's entire uncertainty region.

It was over 2° from the predicted position at the time and magnitude +19, about 9 magnitudes fainter than predicted, based on its brightness during the 2006 apparition, though it is thought that the comet underwent a brightness outburst just before being discovered.
The recovery was confirmed by further positional measurements from observatories Farra d'Isonzo (595) and Great Shefford (J95), both observatories noting the object as diffuse and with an elongated coma or tail pointing to the North-East (upper left in the image below).
Images taken from Great Shefford Observatory of the comet at its 2006 discovery apparition can be found here. 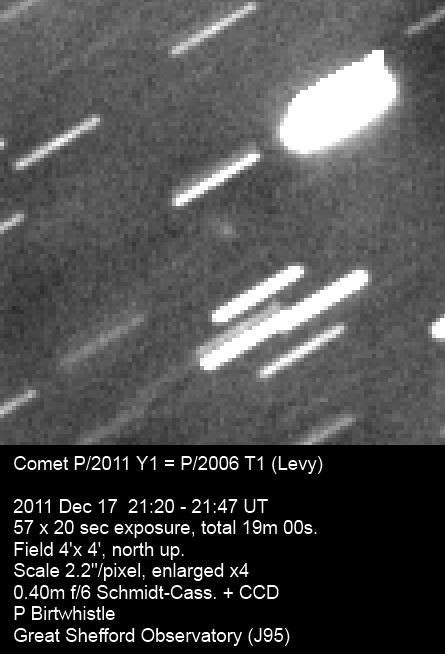 Posted by Peter Birtwhistle at 00:59 No comments:

Poor weather in the first half of November (that stopped the very close fly-by of 2005 YU55 from being observed from Great Shefford) was replaced by a decent last two weeks and plenty of newly discovered NEOs were found to be in need of observation, although a fair number of these were rather faint.

However, there were a few close passes observed and probably the best of those were by 2011 WP4 and 2011 WQ4. My last sighting of 2011 WP4 was on the morning of Nov 23 at mag +17.6 with it moving almost due south at 48"/min. At that time it was just over 3 Lunar Distances (LD) from Earth. Two other observatories observed it in the few hours following but no one reported it at its closest just over 1 day later when it had approached to within 1.5 LD and was moving 5 times faster but had reached high southerly declinations of -60 to -70 degrees. 2011 WQ4, although a similar absolute magnitude to 2011 WP4 (H=+27.4 vs H=+27.2 for WP4, equating to likely diameters in the range of 8-13 meters) was always a fainter target and only approached to 2 LD. It was also last seen on the morning of Nov 23, heading out from its close approach a day and a half earlier but by then was only mag +19 and moving at 55"/min made it a much harder target than 2011 WP4 had been.

At 10pm on the night of Nov 17th I received an email from Michel Ory (discoverer of Comet P/2008 Q2) requesting help to try and recover a fast moving 19th mag. object that Claudine Rinner had discovered two nights earlier from station J43 with a 0.5-m f/3 reflector (she would go on to discover Comet P/2011 W2 less than 2 weeks later with the same instrument). With only three positions spanning just 41 minutes from Nov 15th, the uncertainty in the position predicted by FindOrb for Nov 17th was expected to be fairly large and so a number of fields would need to be taken to stand any chance of recovery. Although Michel had sent the positions into the Minor Planet Center, the object had not yet appeared on the NEO Confirmation page (NEOCP). I started taking images for it within the hour, but already it was getting low in the southwest, the altitude of the field was only 27 degrees and getting lower but even more of a problem was thickening cloud coming in from the west. I managed to search for nearly 45 minutes before being completely clouded out but could not positively identify anything, especially difficult with the poor quality, cloud affected images.

The next night was clear and so I started searching again for the object, earlier in the evening and in better conditions than the night before. By now it was listed on the NEOCP, together with an uncertainty map showing its likely location was expected to be anywhere within a strip of sky over 2.5 degrees long. After 1h 45mins I eventually found the telltale expected movement in blinked images about 3/4 degree ahead of the NEOCP nominal predicted position. To help other observers, at 10:30pm I posted a comment on the NEOCP Blog (http://minorplanetcenter.net/NEOCPblog/) stating where I'd found it and about 15 minutes later, a set of positions from the Catalina Sky Survey Mt. Lemmon telescope (station code G96) were posted from images taken some 18 hours earlier.

In the meantime I had used FindOrb to improve the orbital elements, combining the discovery positions with those I had just measured and worked out an ephemeris for the previous night. With the accurate ephemeris and much improved values for the rate of motion, I was able to re-stack the images from the night before and managed to identify weak images of the object. These were quickly measured and both nights of measures sent in to the Minor Planet Center and by 10:52pm the Minor Planet Center announced the new discovery as Amor object 2011 VP12 in MPEC 2011-W18, containing the discovery positions from J43 together with those from G96 and my two nights. Congratulations to Claudine on this discovery as well as for P/2011 W2!

On Nov 26, NASA launched the Mars Science Laboratory (MSL) on top of an Atlas V rocket and, using an ephemeris from the JPL Horizons web page available from http://ssd.jpl.nasa.gov/horizons.cgi I picked it up on the morning of Nov 28 at mag 16.8-17.0, moving at a fairly gentle 5"/min. The next day a 16th mag object was added to the NEOCP with very similar RA and Dec to where I had observed MSL the night before and moving in the same direction with similar speed. It was quickly determined however that this object was NOT MSL, but rather the Centaur second stage of the Atlas V rocket, about 3/4 degree away from the MSL spacecraft. The Centaur stage is used twice, once to achieve a low Earth orbit after launch, then again to take the MSL out of Earth orbit and accelerate it towards Mars and although not part of the experiment is accompanying MSL on its journey to Mars. I imaged both the MSL and the Centaur 2nd stage on the morning of Nov 30th and by then MSL had more than doubled its distance from Earth since my first observation, 2.8 LDs compared to 1.3 LDs two days earlier and was also a magnitude fainter than before at +18.1. The Centaur stage was much brighter than MSL, maybe by a magnitude or more and was also varying rapidly in brightness, very obviously changing between consecutive images, in marked contrast to the steady light from the more stable MSL spacecraft.
Posted by Peter Birtwhistle at 00:04 No comments: