March and October are statistically the most likely months for NEOs to be discovered that will make very close passes, within 1 Lunar Distance (LD) of the Earth and this March was no exception.

March got off to a good start with the very close fly-by of NEO 2009 DD45, the picture taken during brief gaps in clouds just after midnight on the 3rd when it was at about 0.9 LD from the Earth. Unusually, it was bright enough to be observed from three days before closest approach (discovery by Rob McNaught at Siding Spring at mag +18.7), reaching mag +10 briefly at its closest when at just 0.18 LD (less than 6 Earth diameters away!), fading to 16th mag by the time I first picked it up, but then still detectable at mag +19 in the rich star fields 10°N of Vega three nights later, somewhat brighter than predicted by the MPC ephemeris.

Even before 2009 DD45 had passed Earth, the next close approach object was queuing up. 2009 EW was discovered by the Catalina Sky Survey on March 2nd and picked up from Great Shefford on March 3.0 and again on March 4.9, before being followed through the night of March 5/6th when it came to within 0.9 LD. It was last detected 30 minutes before closest approach at mag +17, moving at 466"/min, 22° above the northern horizon.

Remarkably, less than two weeks later on March 17th, another NEO, 2009 FH was discovered by Catalina, 28 hours before an encounter that would bring it to within 0.22 LD of Earth. When first picked up at Great Shefford at 19:38 UT on the 17th it was already within 1 LD, mag +15 and moving at the relatively sedate speed of 57"/min. I followed it for 2 hours by which time it was 0.8 LD from Earth and had accelerated to 75"/min. It was last reported at 05:02 UT on 18th March, 7 hours before closest approach, at mag +13 and moving at 250"/min by the Catalina Sky Survey's Mt. Lemmon 1.5-m reflector.

A very preliminary light curve from 220 brightness measurements on March 17th indicates 2009 FH has a rotational period of only 6 minutes 26 seconds, with an amplitude of about 0.3 mags. It made more than 13 full rotations during the 1h 27 minutes the observations span. 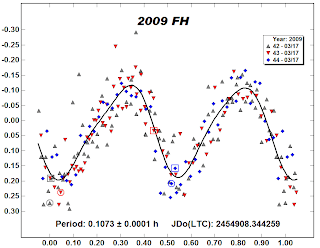 There were a number of other objects that made approaches nearly as close as the Moon, notable were 2009 DO111, passing 1.2 LD from Earth early on March 20th, as bright as mag +12 and showing rotational variations of about 1 magnitude by March 19th and also 2009 FD passing at 1.6 LD on March 27, again reaching mag +12. Unusually, this latter object was not discovered by one of the NASA funded surveys but rather by the team operating the La Sagra Observatory in Southern Spain.
Posted by Peter Birtwhistle at 02:12 No comments: