Discovered automatically by the The Palomar Transient Factory on August 24 at magnitude 17, this was quickly determined to be a very young type 1a supernova, expected to brighten by possibly 6 magnitudes within the next week or two.

The animation below consists of two frames, the first taken on 2003 Jan 28 using a 0.3-m telescope, before the supernova appeared and the second on 2011 Aug 27 using a 0.4-m telescope, with the supernova at magnitude +13.0. This image was obtained during a 4 minute gap with the object passing between trees, when M101 was almost at its lowest point over the north horizon, poor weather preventing any attempt in better circumstances.

Posted by Peter Birtwhistle at 00:03 No comments:

The Sky At Night comes to Great Shefford

The BBC's Sky at Night team visited Great Shefford Observatory on July 6th and filmed a short interview following the very close approach of NEO 2011 MD at the end of June (see the June and July notes).

The interview was included in the program "Dawn at Vesta" and was first transmitted in the early hours of Monday 8th August on BBC1.

Early in July the remarkable NEO 2011 MD was still under observation following its exceedingly close pass to just 7600 miles above the Earth's surface at the end of June. It was visible at high northerly declinations before and after the near-miss only because of the severe perturbations caused by the Earth's gravity, putting a 130° kink in its trajectory (see the JPL news story here)


The final images I obtained were taken during the early morning of July 3 with 2011 MD moving relatively slowly at 5"/min in Cassiopeia in a very rich Milky Way star field, near the border with Cepheus and Lacerta. Even though more than 5 days after the close approach, 2011 MD was still only 2.5 Lunar Distances from Earth and with the object at nearly 20th magnitude this combination caused a rather unusual problem when trying to measure positions. Plenty of images needed to be taken to register a 20th mag target and so I took 200 x 20-second exposures between 00:37 and 02:07 UT, before twilight started to interfere. However, because of the rich star field, wherever the asteroid passed too close to stars many of the images would have to be discarded. Normally, this process is time consuming but straightforward, involving identifying the stars on a line from the first to the last ephemeris position and estimating which of the corresponding images should be left out before stacking the remaining images together to enhance the feeble light from the faint asteroid.
When I did this and started stacking various combinations of images with Astrometrica I kept on finding the faint image of the NEO was contaminated with star trails, which should not have been happening if I had properly identified the images to discard.
The cause of the problem was that the object was so close to the Earth, but moving so slowly against the sky that the Earth's diurnal rotation was causing the apparent track of the NEO to be significantly curved. The image shows the difference between the more usual straight track and the actual curved track.
Armed with the new track and this time leaving out the correct images I managed to get three sets of images stacked and measured and sent off to the Minor Planet Center. The position measured from the final stack, shown here was the last reported sighting of 2011 MD received by the MPC. 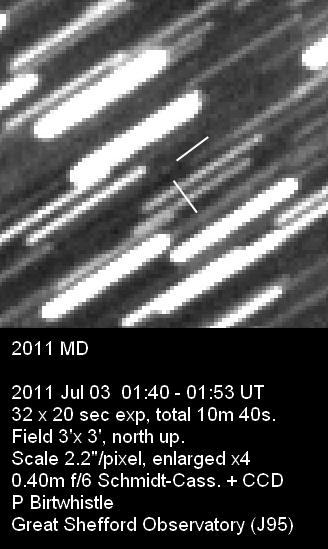 Later in the month I searched for NEO 2000 CP101, discovered by LINEAR on 2000 Feb 10 and observed for the next 30 days but not seen in the 11 years since. By July 24 it was expected to be 18th magnitude but the 3-sigma uncertainty area was a daunting +/- 21 degrees long, stretching east and west from the nominal prediction, far too big to sensibly search the whole area using my 0.3 degree field of view.
In an effort to try and reduce the scale of the search I retrieved all the original astrometry via the Minor Planet Center's MPCOBS facility at http://www.minorplanetcenter.net/db_search and then used FindOrb, brutally filtering out any observations that had residuals bigger than 0.5" and then producing an ephemeris from the resultant orbit. The MPC prediction by contrast was much more lenient and included most of the original observations. My ephemeris placed the object a couple of degrees to the east of the MPC prediction and hoping for the best I started searching from that point, working outwards both to the east and west.
I started at dusk and after 4.5 hours, covering 13 fields of view, I eventually picked up the telltale motion of 2000 CP101 just before dawn. It turned out to be 3.7 degrees east of the MPC prediction. After obtaining confirming images the following night, the recovery was announced in Minor Planet Circular MPEC 2011-O29.
﻿
﻿ ﻿ ﻿
Posted by Peter Birtwhistle at 01:48 No comments: