Apollo 2009 TM8 made a very close approach to the Earth early on Oct. 17th about 48 hours after discovery by the Catalina Sky Survey. It was followed from Great Shefford from soon after sunset on Oct. 16th when it was moving at an apparent speed of 180"/min, through to 04:20 UT the next morning by which time it had accelerated to 285"/min. It reached its closest to Earth at 03:37 UT at a distance of 0.9 LD. The brightness stayed fairly constant, around mag. +17.5 all night, the decreasing distance from Earth being offset by increasing phase angle but the large increase in apparent speed made it a more difficult target as the night wore on.

Another newly discovered Apollo, 2009 UD passed Earth at 2 LD on Oct. 20 and was observed on the morning of Oct. 17th for 2 hours and again for 3 hours the next morning when it was at about 3 LD and mag +17.0. Over 1,000 images were obtained in those 5 hours and allowed the determination that this ~15 metre diameter object rotates very fast with a period of 83.7 seconds with an amplitude of about 0.7 magnitudes. 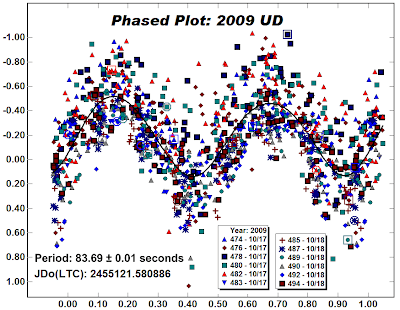 2009 UV18 was an interesting LINEAR discovery from Oct. 22, relatively bright at mag. +18 and unusually large for a new discovery, estimated at over 2 km diameter. With a low inclination and the Earth approaching the ascending node of the orbit the size of the orbit was initially rather indeterminate and attempts at trying to identify it with a known minor planet failed, even though it ought to have been relatively bright in earlier apparitions. Then, on Oct. 29, Rob Matson, well known for precovery work with online image databases managed to find it on old NEAT images from Jan 2004, fortunately only 2.5° from the predicted place, even though the uncertainty was estimated at up to 90°.

The orbit of 2009 UV18 is similar to a Jupiter family comet and although it appeared stellar in images taken on Oct.23 and Oct. 26th it is probably worth keeping an eye on as it approaches perihelion this January in the morning sky. The last favourable return appears to have been in May 1993 when it should have reached mag. +16 and before that spring 1976 at mag +17.

The LCROSS mission was followed one final time on the night of Oct 8/9th. The spacecraft was only 6.4° from the gibbous Moon and internal reflections in the telescope made it a difficult target. Unfortunately the sky clouded over before the LCROSS shepherding spacecraft separated from the Centaur at 02:50 UT, the last images obtained that show LCROSS were taken at 01:56 UT but were so light polluted they could not be measured. The image of LCROSS was taken about an hour earlier, before the glare from the Moon became too strong, less than 11 hours before impact with the Moon. 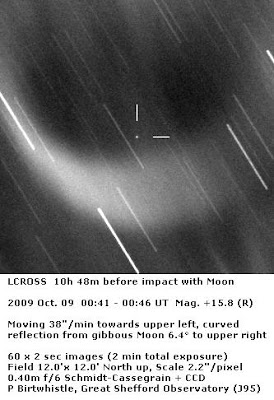 What initially appeared to be a Near Earth Asteroid discovery was reported by the Catalina Sky Survey on Oct 26 and received their temporary designation 9U01FF6. It was 19th magnitude and moving at 10"/min but was already closer to Earth than the Moon. After follow-up from other observatories that same day it was found to be in a very unusual 31.5 day period, highly eccentric geocentric orbit, taking it to within 82,000 km of Earth (0.2 Lunar Distances) at perigee and out to 761,000 km (2.0 LD) at apogee. With an absolute magnitude of +30.9 it would only be 1-2 metres in diameter if it were a natural object, but smaller if artificial (with a higher albedo assumed). Further observations were made from Great Shefford on the evening of Oct. 27th and the last positions reported this perigee came from the OAM Observatory at La Sagra in Spain early on Oct. 28th.
9U01FF6 is fainter than mag. +21 for most of its orbit but will next be at perigee around Nov. 28th and should reach +16th magnitude but moving as fast as 250"-500"/min on the evening of Nov. 27th. Hopefully it will be recovered in the days leading up to that but observability is probably limited at most to only 2-4 nights each perigee. It is likely to be an unusual artificial satellite but further observations at the end of November are encouraged.
Posted by Peter Birtwhistle at 01:15 No comments:

September was a busy time for NEOs, with the 's NEO Confirmation Page (NEOCP) listing many newly discovered objects during the month. On Sept. 17th and again on 26th more than 30 new and potentially interesting objects were on the NEOCP page and by the end of the month an extra 106 NEOs had been added to the MPC's database.
Apollo 2009 SH2 was discovered by Gordon Garradd at Siding Spring on Sept. 18th as an 18th mag. object and was due to make a fly-by of Earth within 3 Lunar Distances (LD) by the end of the month. It reached mag +16 when last seen from Great Shefford on Sept. 29th.
Another Apollo 2009 SN103, this one discovered by the Catalina Sky Survey on Sept. 25th was 19th mag., already within 4 LD of Earth and moving at 11"/min. It would reach its closest to Earth (1.2 LD) at about 05h UT on Sept. 28 as it overtook the Earth on its way to perihelion on Oct. 30th. It was observed from Great Shefford 6 hours before closest approach when it had brightened to 16th mag. and had accelerated to a speed of 138"/min. It was also caught the next night in central Gemini, moving slower at 86"/min but with the phase angle increasing very rapidly, it was 18th mag., fading quickly and was a much more difficult target to record.
It is estimated that 2009 SN103 is only about 8 meters in diameter. Another close approach NEO discovered by the Catalina Sky Survey on Sept. 27th and estimated at about 20 meters diameter was 2009 SU104. This Apollo has a very eccentric orbit taking it very close to the orbit of Venus at perihelion, out to 4.2 AU at aphelion. At this apparition it was on its way to perihelion in Nov., crossing the Earth's orbit just after the Earth had passed by. It was observed at its closest at 2.5 LD on Oct 1st when it was mag. 16 and moving east to west at 223"/min in Equuleus.
Several distant artifical satellites were also followed during the month, including LCROSS on Sept. 12th & 16th before it disappeared into southerly declinations until a few days before its impact with the Moon on Oct 9th. The Herschel telescope was also recorded on Sept. 17th at 19th mag. Ephemerides generated from previous astrometry obtained for this object were useless to try and pick it up again as the spacecraft undergoes frequent orbital manoeuvres to keep it near the second Lagrange point (L2). The JPL Horizons ephemeris allowed Herschel to be picked up without problem, moving at 3"/min.
Posted by Peter Birtwhistle at 11:38 No comments: