August carried on the very good trend of the first half of 2009, with 18 usable nights providing 96 hours of observing and with plenty of NEO discoveries made by the US based surveys it was a busy month.

On July 30th a fast moving 15th magnitude object found by the Catalina Sky Survey and designated as 9O0DC57 by them was put on the Minor Planet Center's NEO Confirmation page, only to be taken off again the next day with a note "was not a minor planet", normal procedure by the MPC when an artificial satellite is mistakenly picked up as a NEO.
This one though did not match any of the artificial satellites with published orbits. It has a perigee of 18,000Km and an apogee 1/3 the distance to the Moon, making it easily mistaken for a NEO during a close approach.
I followed it over a number of nights during August and on August 2nd managed to determine that it rotates every 5.6 seconds, following it from 00:29 UT into twilight at 03:16 UT. From 00:27 to 01:52 UT it showed a regular 1.5 magnitude variation, but when next picked up at 02:56 UT it was showing a very short flash superimposed on the regular variation, probably less than 1 second long and of about 0.75 magnitudes amplitude. Only about 10 minutes later this flash had increased to about 1.5 magnitudes. The lightcurve is from 495 measurements of 1 second exposures, folded using a period of 5.620 seconds, with the increasing flash marked with curves A and B between phase 0.10 and 0.35. The inset from a 60 second exposure started at 03:21:26 UT shows the object trail 250" long and captures 11 flashes and the secondary maximum can just be made out just to the right of the bright flash. 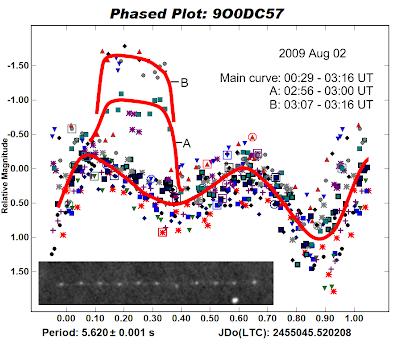 An 18th mag object moving at 18"/min at discovery and put on the NEO Confirmation page on August 22 turned out to be an very impressive amateur discovery by Noeline Teamo from the Hibiscus Observatory (F84) in Tahiti. Designated 2009 QC23 it was followed at Great Shefford for a week.

Another amateur NEO discovery was made on Aug 27th by the team at the OAM Observatory, La Sagra in Spain, but because it got a low NEO rating by the MPCs automated procedures it never made it onto the NEO Confirmation Page. Team member Reiner Stoss alerted observers that two nights of positions had been obtained and requested further observations via the Minor Planet Mailing List (http://tech.groups.yahoo.com/group/mpml/message/22231). A set of positions obtained just before midnight on Aug 28 from Great Shefford allowed the MPC to announce the new Amor object 2009 QY33 the next day.
Posted by Peter Birtwhistle at 01:43 No comments: