Observing was limited in March, a combination of poor weather with very few nights keeping clear throughout and also the telescope being out of operation for a week, the problems eventually being tracked down to a failing mains transformer (see investigation in progress).

On 7th March (four days before the telescope broke down!) the Apollo 2008 EZ7 was discovered from the Siding Spring Observatory in Australia. From its accelerating motion it was obviously already very close to Earth and it was put on the NEO Confirmation page later that day. With a rapidly expanding uncertainty area where the new fast moving object was predicted to be I was fortunate enough to be able to confirm it later that evening at magnitude +17, at an altitude of less than 13 degrees, shortly before it disappeared into trees.

The next night it was to pass only 0.419 Lunar Distances (100,000 miles) from Earth, closest approach being at 01:21UT on 9th March. The first half of the night was cloudly but with breaks expected later in the morning. I started to try for it through gaps in the clouds at 01:47UT at which time it was moving at over 630"/minute. On the first low resolution shot taken to position the telescope, there it was, very obvious as a strong 30" long streak in the 3 second exposure. However, for the next half an hour the clouds stopped me getting anything other than more positioning shots, but eventually it was recorded in a 30 second gap in the clouds, enough to get eight 1 second exposures off. At that point it was magnitude +13, moving at 623"/minute and only about 102,000 miles from Earth.

The eight (rather noisy) images have been combined here with 2007 EZ7 moving from right to left. The field of view is 18'x18' and there is a 2 second gap between each of the exposures. 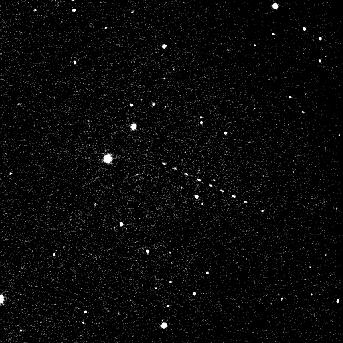 A few minutes later, when repositioning the telescope for the next attempt I recorded 2007 EZ7 streaking along as before, but also with another very similar streak in the field of view. This turned out to be artifical satellite 1985-048C=15825U, moving at about 900"/minute and more than four times closer than the NEO. I wonder how many NEOs on very close approaches are assumed to be artificial satellites in CCD images? 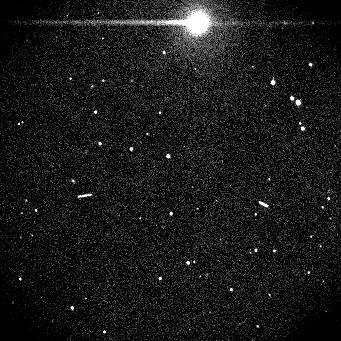 At the time of writing there have only been two other NEOs (with well determined orbits) that have been observed closer to Earth than 2007 EZ7, those being 2004 FH and 2006 DD1, but no doubt, with the pace of NEO discoveries at the moment, it is only a matter of time before another is seen to fly past even closer. Just three weeks later 2008 FP came closer than the Moon and was observed by the Catalina Sky Survey only slightly further out than 2007 EZ7, at a distance of 106,000 miles.
Posted by Peter Birtwhistle at 08:42 No comments: